When the digital SCETV series History In A Nutshell came to fruition, its goal was simple: to aid educators by highlighting historical topics not previously found on Knowitall.org. History is most definitely in abundance – not just here in the great state of South Carolina, but around the world. Knowitall.org currently features many historical topics; however, there are also many events and people with little to no content at all. History in a Nutshell aims to fill in these gaps, and cover each topic in a short, straight-to-the-point, and hopefully, an entertaining way!

How well do you know history? Test your knowledge by scrolling through the questions below! 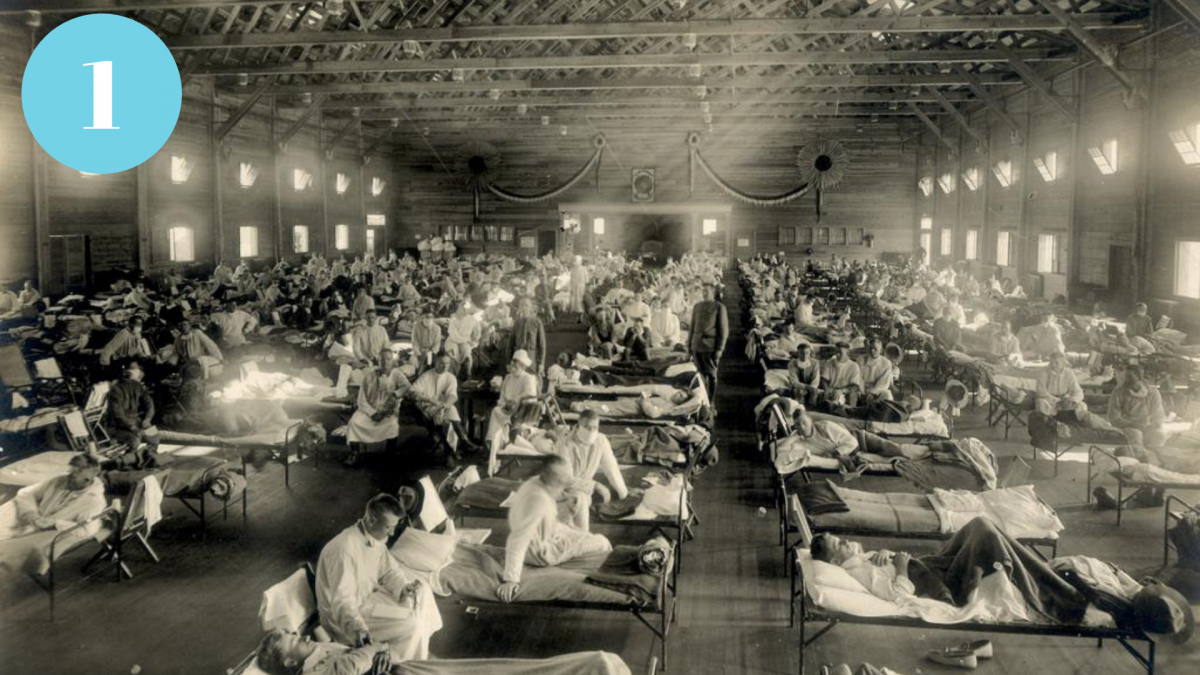 1. Geographically, where did the 1918 Flu Pandemic originate?
A. United States
B. Spain
C. France
D. Unknown

If you answered D, then you are correct! Historians and scientists alike have debated the 1918 Flu Pandemic’s location of origin ever since the global crisis ended. To this day, there is no definitive consensus for where exactly it started. The first reported case in the U.S. was at Camp Funston, in Fort Riley, Kansas, in March 1918. However, France, Great Britain, Austria, and China have all been suggested as possible origin sources as well. The 1918 Flu Pandemic claimed more lives than World War I, with death tolls estimating around 50 million! To learn more about the 1918 Flu Pandemic, click here! 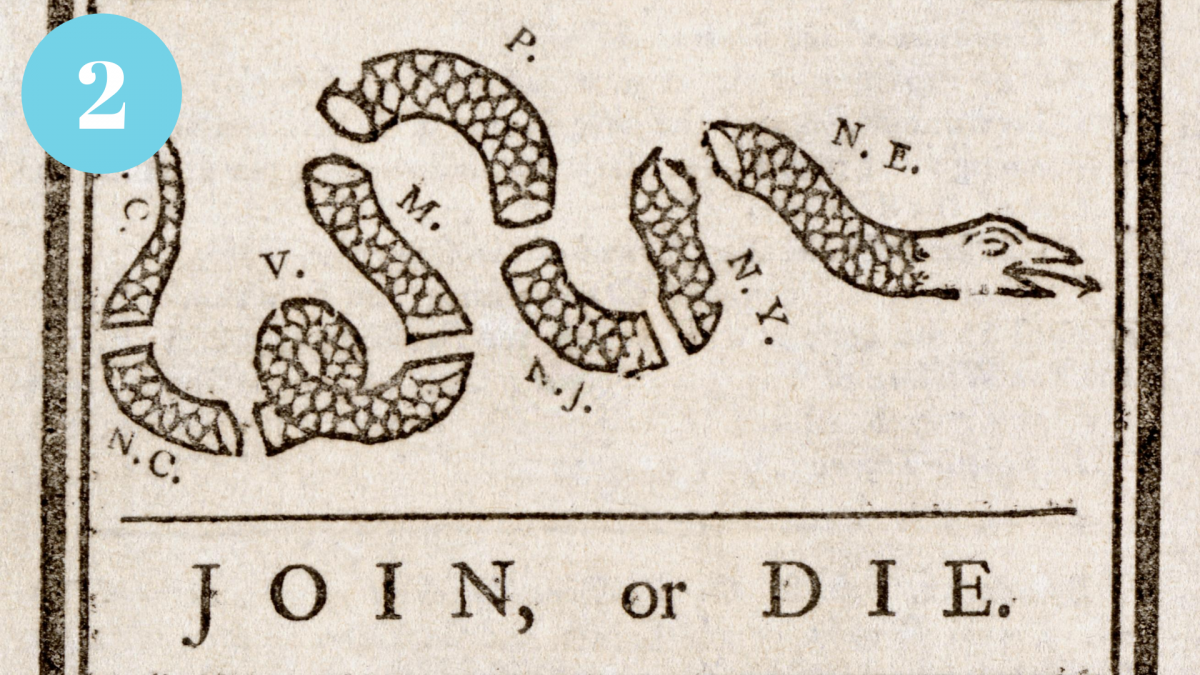 2. In the events leading up to the French and Indian War, an eight-piece cartoon snake, with the words “Join or Die” inscribed underneath, helped encourage the British colonies to unite.  Who created this pivotal cartoon? Hint: the artist would later become one of America’s most well-known Founding Fathers!
A. George Washington
B. Robert Dinwiddie
C. Benjamin Franklin
D. Alexander Hamilton

The correct answer is “C. Benjamin Franklin”! Franklin drew this cartoon for the Albany Congress in 1754. The goal of the Albany Plan was to unite the British colonies with various Native American tribes, to better prepare for the upcoming conflict against the French. Unfortunately, the Albany Plan was never ratified by colonial legislatures, nor was it ever approved by the crown in England. To learn more about the French and Indian War, click here! 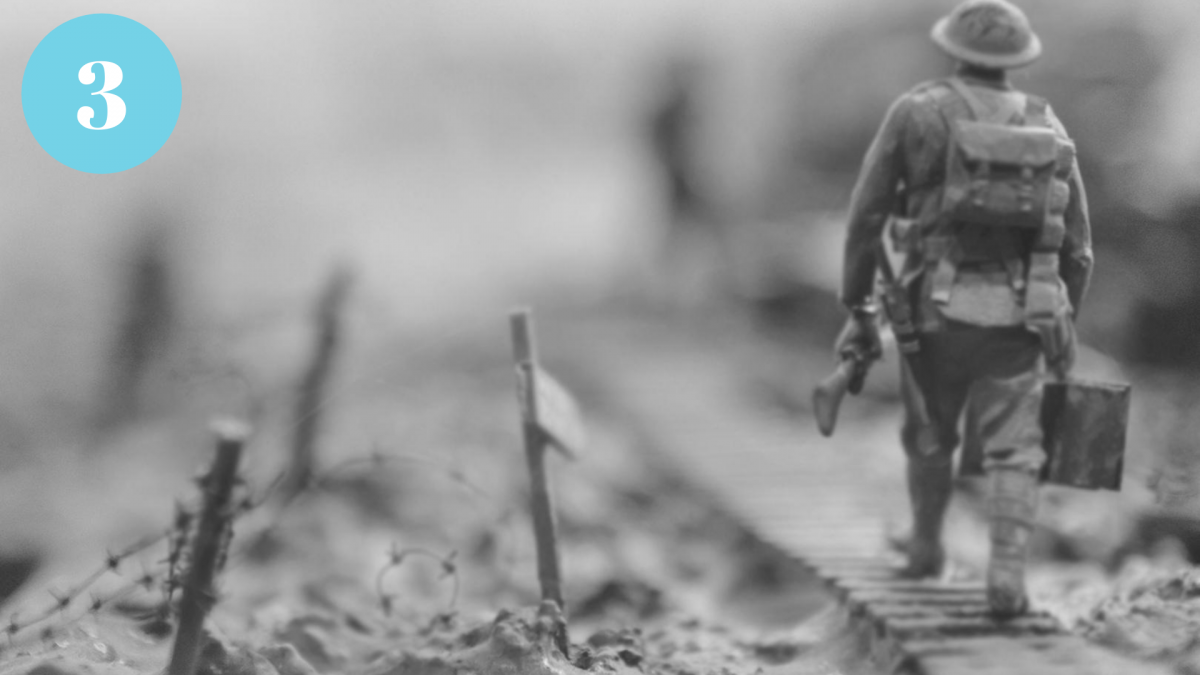 3. World War I broke out in 1914, which was the result of years of political tension between countries in Europe. The United States, originally neutral, entered the conflict in 1917. Why did the U.S. enter World War I?
A. Unrestricted Submarine Warfare
B. The sinking of the R.M.S. Lusitania
C. The Zimmermann Telegram
D. All of the Above

If you answered “D. All of the Above” then you are correct! Kaiser Wilhelm II of Germany refused to cooperate with American negotiations to stop its submarine attacks on merchant vessels. With the sinking of the Cunard liner Lusitania, and the interception of the Zimmermann Note (intended for Mexico), President Woodrow Wilson was under intense political pressure to join the Allies in the fight against the Central Powers. To learn more about World War I, click here! 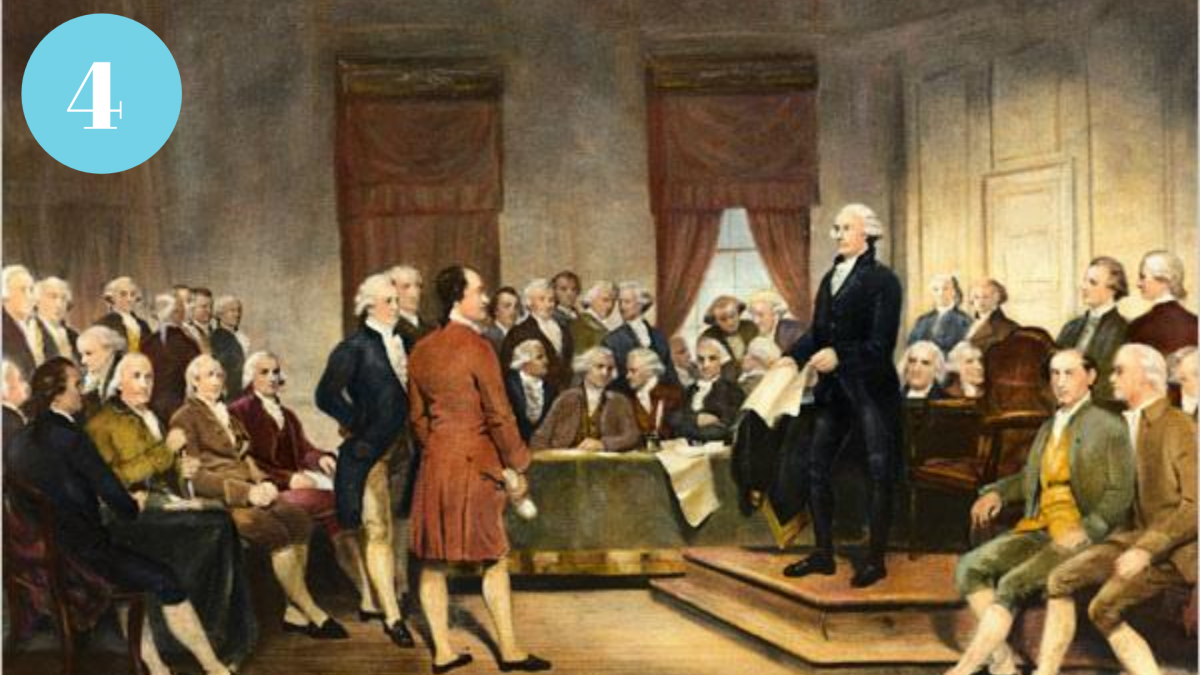 4- The U.S. Constitution is an amalgamation of principles from state constitutions, the Articles of Confederation, and political philosophers. Which of the following is NOT one of the philosophers used to create the Constitution?

A. Edward Gibbon
B. Baron de Montesquieu
C. John Locke
D. Jean-Jacques Rousseau
The correct answer is “A. Edward Gibbon.” The Founding Fathers borrowed concepts from Locke, Montesquieu, and Rousseau to create the U.S. Constitution. Edward Gibbon is an Enlightenment thinker like the other aforementioned philosophers, but Gibbon is a historian most well known for penning his Decline and Fall of the Roman Empire. To learn more about the Birth of the Constitution, click here!

Speaking of the Roman Empire… 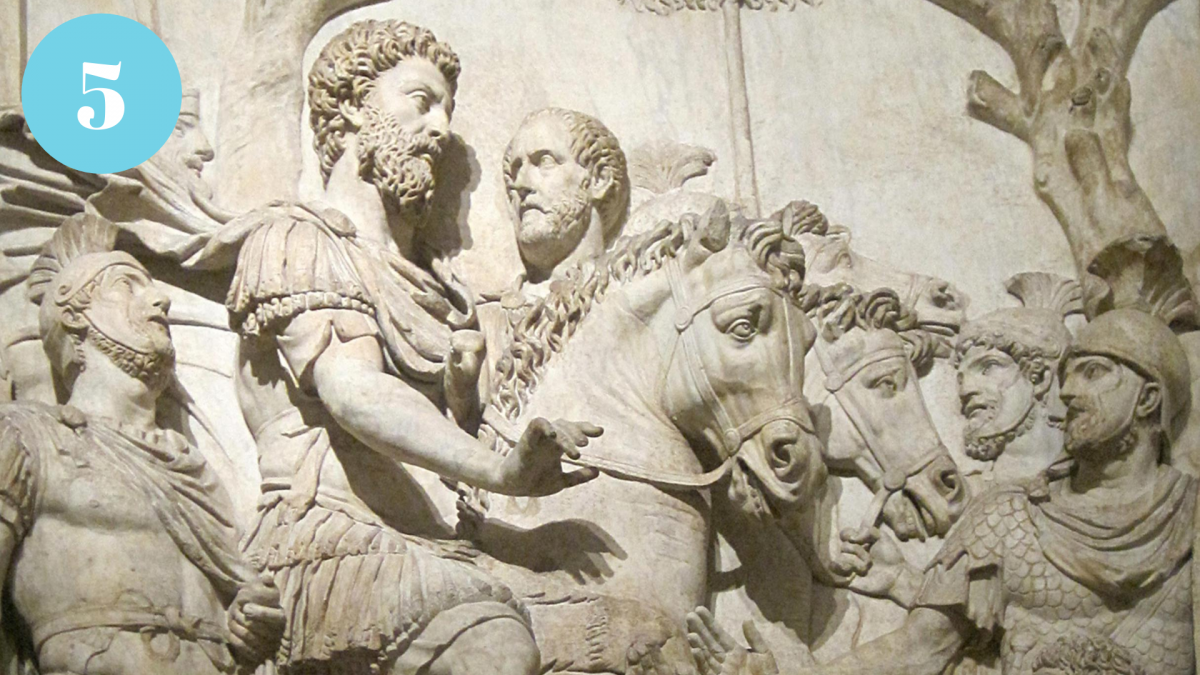 5. For most of its history, the religion of the Roman Empire was polytheistic. Romans worshipped many gods, like Jupiter, Minerva, Mars, Neptune, and Pluto. Rome would remain polytheistic until Christianity grew to prominence throughout its territories. Which Roman Emperor made Christianity the official religion of Rome?

A. Caligula
B. Theodosius I
C. Constantine the Great
D. Vespasian Flavius

The correct answer is “B. Theodosius I.” While Emperor Constantine I heavily promoted the Christian religion, Rome did not officially become Christian until the reign of Emperor Theodosius I. To learn more about Ancient Rome, click here! 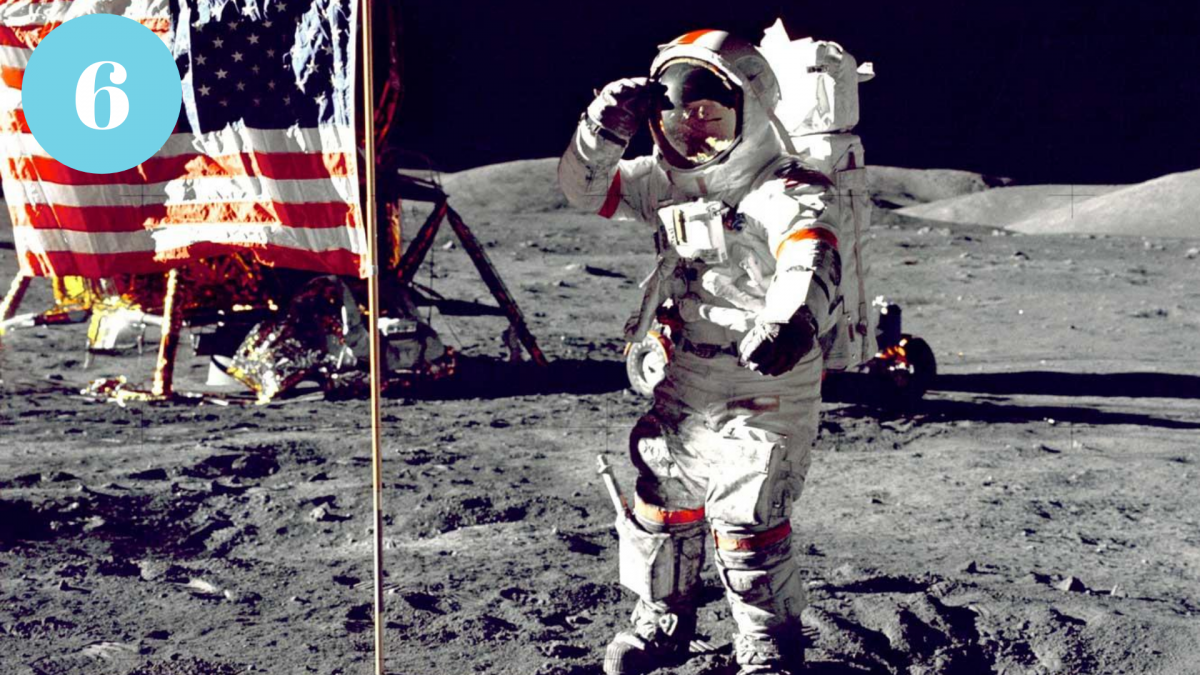 6. Last question! In the “Space Race” to the moon, the “Mercury Seven” was America’s first group of astronauts. After all the trials and tribulations to get to the moon, only one of the original seven would make it there. Who was it?

If you answered “C. Alan B. Shepard”, you are correct! The Freedom 7 astronaut would walk on the moon on Apollo 14, in 1971. Gus Grissom lost his life alongside astronauts Ed White and Roger Chaffee in the Apollo 1 fire. Apollo 7 was Wally Schirra’s last spaceflight, and Deke Slayton’s only flight was the Apollo-Soyuz Test Project. To learn more about the Space Race, click here!

How many questions did you get right? Let us know in the comments below!

Stay tuned for the newest edition of History In A Nutshell, which explores the Battle of Sullivan’s Island, in the American Revolution, and the evolution of the South Carolina-centric holiday, Carolina Day!

George Rogers, a native of Duluth, Ga., has always had a love for football. A standout at Duluth High School, Rogers decided to attend the University of South Carolina when...

Women Won the Right to Vote a Century Ago; This Organization Works to Protect That Right

In February of 1920, just six months before the 19th amendment was ratified, the League of Women Voters was founded by Suffragists of the National American Woman Suffrage...