Student Blog: My summer at SCETV with the CBGC The Creative Black Girl Collective experience made the summer of 2022 a summer that I will never forget.

I was a part of an aspiring group of 16 Black girls selected to create more content for Conversations with Crescent. Conversations with Crescent is a series about a group of teenage Black girls navigating the world and, while doing so, they educate themselves and their community. The special thing about this show is that the main characters, Crescent, Maisha, and Kayla are Black. Growing up, I haven’t seen Black girls represented in the media like other girls in the media. If we are or were represented, it was typically stereotypical. Witnessing black girls being represented in an unambiguous light is such a refreshing feeling.

During the week, we stayed in the dorms at the University of South Carolina and went to SCETV to work on the series. We worked on things such as writing scripts for the upcoming episodes, voice acting, and character designs. My favorite part of the production process would be the plot outline and script writing. What I liked most about these activities was seeing how creative Black women can be when we come together as a collective, but also hearing the reason why the other girls picked topics such as cultural appreciation, earth science and health, and dress code for plots. Knowing they had the same negative and positive experiences as me really helped me feel less isolated.

Daily, we would receive pertinent lectures from inspirational women working in the media industry. One of the beautiful, insightful women who talked to us was Dr. Yaba Blay. During Dr. Blay's lecture, she discussed her experiences of previous jobs that she did before becoming a writer, but also childhood experiences like colorism. Dr. Blay went through a lot of turmoil in her life; but she never quit nor let those things stop her from achieving her purpose in life and making Black girls feel seen and supported. 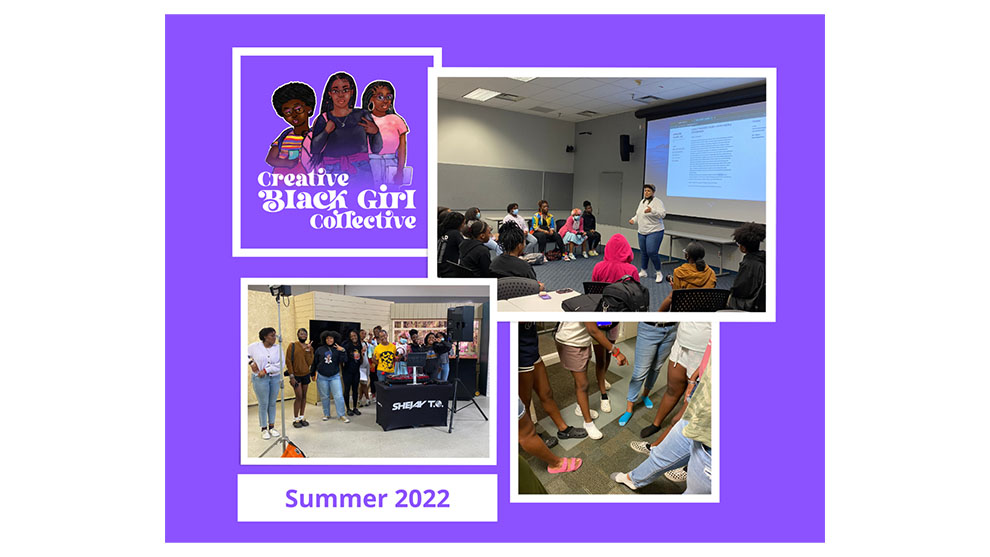 In the application, we were asked to complete the statement, “Just because I ____, doesn’t mean I _______.” and guest speakers filled in the blanks too. Some that resonated with me from our beautiful guest speakers were Dr. Kimberly Butler Willis’  statement “Just because I fail doesn't make me a failure.” and Nikky Finney’s statement, “Just because I'm kind doesn't mean I won't light a fire around your lies.”  One of the biggest take-aways I got from the talks was to not let the beginning of the book define your ending, meaning do not let what happened in the earlier stages of your life define how you carry and present your legacy to the world.

Even though we came to SCETV to learn more about media management and production, we also had memorable moments like the cypher with DJ T.O. of Dimensions Entertainment. In the cypher, we wrote lyrics about ourselves, Crescent, and black girl experiences. Then we performed them over a beat with DJ T.O. on the 1s and 2s. When it was my turn to get in the cypher, I was very anxious. I've done poetry before, just never rapped to it, so I feared being publicly humiliated. So as a result of my having such bad anxiety, I had a panic attack. The amazing thing was I had so much love and support from Dr. Salandra, my counselors, and my friends that I was able to overcome the fear of embarrassment and do my cypher.

To get this memorable experience, I had to leave home. I was nervous. I've never stayed away from home for one day, let alone a week. To my surprise, I genuinely enjoyed it and wished I could stay longer. The girls were all so welcoming toward each other and we just all naturally clicked. We had so much fun playing games like hide and seek, tag, truth or dare, and made Tik Tok videos. I will forever be grateful to be in an environment where all I was surrounded by was love, compassion, and support. Having older women tell me about their hardships and letting me know that I wasn't alone… Having people around telling me they were proud of what I was doing and who I was becoming… Having the honor to say that I helped other Black girls feel loved and represented, means the world to me.

I hope you enjoy what we created. We can’t wait to share it!

Taylor Greene is a rising sophomore at Fort Dorchester High School. She enjoys writing and fashion.