PBS KIDS’ October programming, including when to watch, is included below:

Kindness & Bullying Prevention
Explore kindness and Alaska Native values like showing respect, sharing and taking care of others, with new episodes in this new PBS Kids series from October 7-11, 2019
“Northern Lights/Fiddlesticks”
Premieres and streams October 7
“Turn on the Northern Lights” - When Trini confesses that she’s never seen the Northern Lights, Molly makes it her mission to show them to her. But after several sleepless nights, they still haven’t seen the Aurora Borealis. Can a little help from lots of different sources help them see the lights?
“Fiddlesticks” - After an awesome jig dance at the Tribal Hall, Molly can’t wait for her fiddle lessons with Oscar to start, but she soon discovers she has a knack for playing the drum. A knack that turns into a passion. Can Molly figure out a way to break the news that she won’t be taking fiddle lessons from her friend?
“Mollyball/Visit Qyah”
Premieres and streams October 8
“Mollyball” - After wet cement ruins Molly and the gang’s plans for a basketball rematch, they head over to the Trading Post where they create a new game called Mollyball! As the game gets more and more complex, the kids must figure out a way of explaining the rules and later, how to end the game.
“Visit Qyah” - While looking through a travel guide of different Alaskan villages, Molly discovers that Qyah isn’t included! Molly convinces the guide’s author to visit her village and gets everyone involved to show the writer a good time. Will Molly succeed in getting Qyah into the guidebook?
“The Night Manager/Not So Permafrost”
Premieres and streams October 9
“The Night Manager” - When the Sassy Ladies of Saskatoon arrive at the Trading Post a day early, Molly’s confident that she and Trini can handle checking them in using a handy guide for guests. But after a series of blunders caused by following the instructions in the guide, Molly realizes she may be in over her head.
“Not So Permafrost” - When Molly and her friends arrive at their old clubhouse, they are surprised to find it half sunk into the ground! Molly is determined to save the structure, but first she must solve the mystery of why it’s sinking in the first place.
“Tooth or Consequences/ Qyah Spy”
Premieres and streams October 10
“Tooth or Consequences” - A sensational video turns Molly’s excitement about an upcoming dentist visit into panic. Do dentists really drill cavities with jackhammers? Molly and her friends have no desire to find out. Can they duck the traveling dentist long enough to get away pain-free?
“Qyah Spy” - It’s all fun and secret spy games until Molly and Tooey stumble across a mystery visitor in Qyah. The duo deduces the visitor must be a spy when they examine the stranger’s clothing and hear a conversation between an unfamiliar voice and Auntie Midge in a language that sounds like “secret code.” Is their beloved chief embroiled in a secret spy ring?! Stay tuned, for all is not what it seems...
“Ice Sculpture/Tale of the Totem”
Premieres and streams October 11
“Ice Sculpture” - When Auntie Midge informs Molly that her Mom was once an accomplished ice sculptor, Molly decides to organize an ice-sculpting competition in Qyah. But when rising temperatures threaten to melt the ice, Molly must come up with a clever solution to save the contest.
“Tale of a Totem” - Molly’s excitement about attending her first totem pole raising in Sitka quickly turns to panic when she and Randall accidentally lose an important piece of the totem pole—one of the abalone shell eyes on a raven. Can they find a replacement before the ceremony that afternoon? 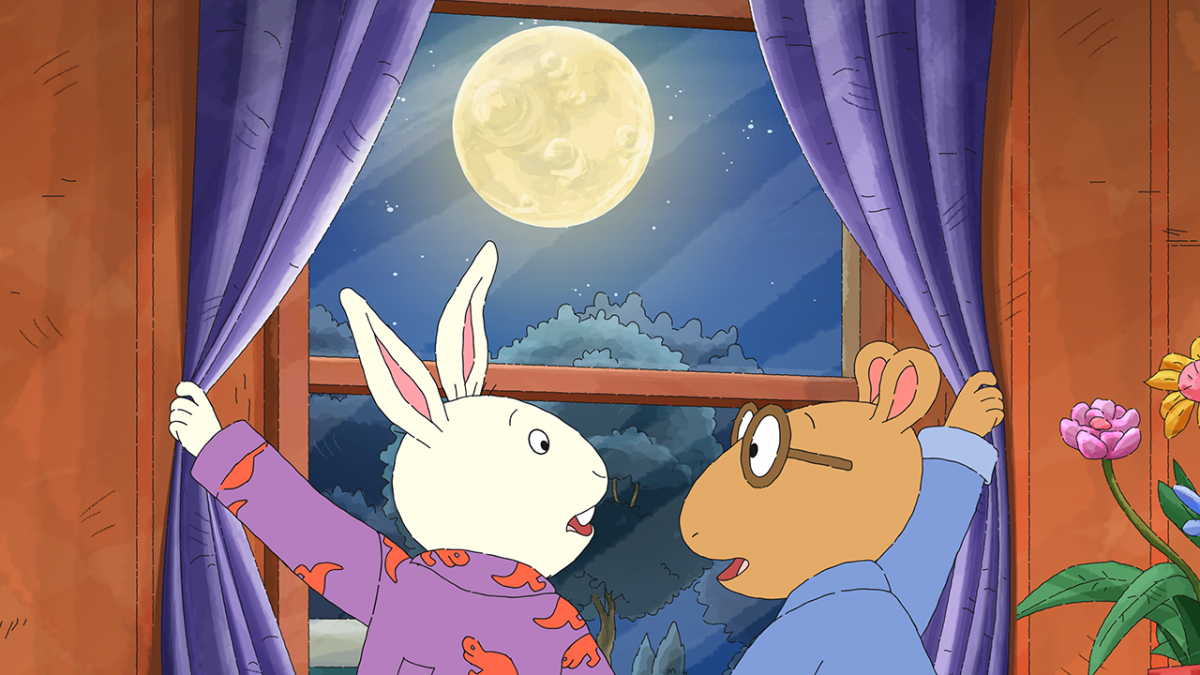 “Fright Night/Citizen Cheikh”
Premieres and streams October 14
“Fright Night” - Buster’s Uncle Bob – portrayed by special guest R.L. Stine – comes to visit, and tells Buster a spooky bedtime story about his childhood encounter with a mysterious creature called “the lycanbunny.” But lycanbunnies aren’t real…are they?
“Citizen Cheikh” - When Cheikh learns that he and his family are becoming American citizens, he worries that they will have to abandon their Senegalese culture and only do “American” things.

“The Pea and the Princess/D.W. and Dr. Whosit”
Premieres and streams October 15
“The Pea and the Princess” - The 3rd grade class is putting on a production of “The Princess and the Pea,” and Prunella is at the helm as director. She has a unique vision for the play, but nothing seems to go according to plan.
“D.W. and Dr. Whosit” - It seems like everyone is talking about a new television show…everyone but D.W., that is! After Mom and Dad tell her that she’s too young to see it, D.W. is determined to watch and find out what all the fuss about.

“When Duty Calls”
Premieres and streams October 16
“When Duty Calls” - Ladonna finds out the Army is transferring her dad to Oregon, and the whole Compson family is moving again. That means she’s going to have to leave behind her school, her friends, and the story she’s been writing with Fern! Fern and the others can tell Ladonna is upset, but don’t know how to help. What can they do to make the transition easier for the Compsons?

While treat or treating, Francine meets an elderly woman with a very mysterious past, while Binky finds himself at Mr. Ratburn’s amazing haunted hour. Arthur, Buster and Ladonna’s tree house sleepover seems to be haunted … but by what?

It’s George’s first Halloween in the country, and Bill tells him and Allie about the “Legend of No Noggin” a hat-kicking scarecrow. George and Allie are determined to find out if the legend is real, while George tries to decide what he’s going to be for Halloween so he can win the costume contest.

The Cat in the Hat takes Nick and Sally on the craziest Halloween ride filled with scary fandangles, big laughs, and music and fun from all angles! Their adventure takes them deep into the Oooky-ma-kooky Closet where Nick and Sally discover the very best Halloween costumes ever!

The Wild Kratts aren’t too sure what to do for Halloween. They decide to discover some new “creepy cool” creatures. But Martin and Chris don’t realize that Zach and the other villains have come up with a plan to ruin Halloween. Can the Wild Kratts still celebrate Halloween?